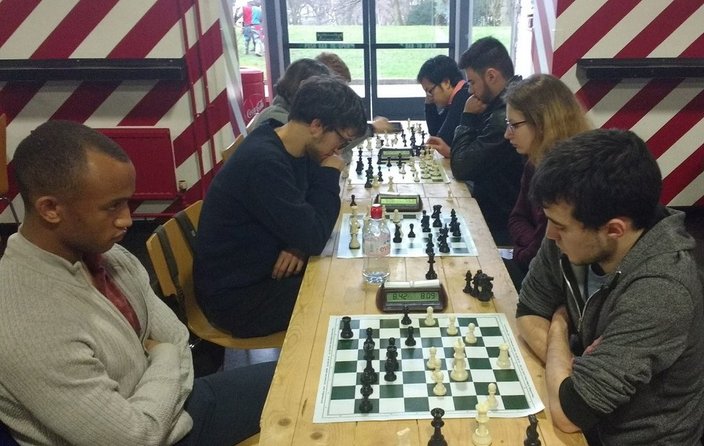 At the end of the 2015 summer term, the outgoing President of Durham University Chess Club, Peter Hornsby,  attempted to arrange a friendly match against York University to celebrate the end of the exam period. However Leeds University were also interested in participating, so with the help of Joel Wagg and Alexander Taylor a small scale rapid-play team competition was set up for students to take place at the University of York. It was labelled ‘The Northern Universities Chess Championship’ (NUCC) inviting teams from across the UK. There were 32 students representing a handful of universities on the 14th of June 2015, which resulted in Durham prevailing over York in a thrilling finale to claim the inaugural title.

Eager to build on this success this group of friends sought support to enhance this student venture for the next academic year. This was achieved through a chance meeting with the director of the ‘British Chess Magazine’, who generously agreed to sponsor the next event and provide memorabilia for tournament prizes. ‘Purling London’ also kindly donated a prestigious Chess board which was to be used as the overall first trophy for the winners, and has been used ever since.

On the 6th November 2015 twenty teams from a dozen universities took part in the second instalment of NUCC at York University, with Edinburgh the eventual winners. The success of the tournament was recognised through publications in the Yorkshire Post, The British Chess Magazine and the Durham Palatinate, significantly raising the profile of NUCC.

Purling London donated one of their luxury Chess sets as the trophy for the first placed team with each winning team having their name engraved on a square every year, which has been used ever since.

Buoyed by this success members of the NUCC committee launched a sister tournament in the south at the University College of Law, which despite being the first event it immediately matched the enthusiasm seen in York, with Oxford University triumphing overall. Lord Lyndon Harrison of Chester offered his valuable support in attending, and awarding the prizes in the closing ceremony.

A development and re-branding of NUCC came out for the 2016-17 season, '2020 Chess', which was designed to crown the best rapidplay team in the country with 20 minutes per player with no increment as the time controls reflecting the name. New sponsors were brought in from Chess and Bridge who kindly provided Chess sets and prizes, along with slick new digital clocks raising the profile and professionalism of the tournaments. Chess Openings Wizard became the first Chess software company to support us offering yet more prizes all the way from the United States, demonstrating how 2020 has received recogition around the world!

Events have since been held across the UK, in record breaking numbers in London, Leeds,York, Birmingham and Manchester with the top teams, many of them from schools and clubs as well as universities, qualifying for the ‘2020 Grand Final' which takes place ever year in February/March.

After several successful years the organisers were in a position to re-structure the competition in order to raise money for their chosen charity, Oxfam who agreed to partner with 2020 Chess. Please go to Oxfam.co.uk for more details about the fantastic work they do.

Oxfam on Twitter: "@2020chess Wow this is great! Thanks for everyone involved and for choosing Oxfam as the charity to donate to. It is a real pleasure! 🏆😊💚 - Freddy" / Twitter

Warwick were the first winners in 2017 in York, with the Mayor Barbara Boyce kindly attending to award the prizes.

Surbiton Chess Club claimed the title in 2018 in Birmingham, and Imperial triumphed in the same location in 2019 with the strongest ever side to take part featuring three International Masters.  Warwick regained their title in February 2020 at the same venue, then the pandemic hit.

After a two year hiatus, over the board '2020 Chess' resumed, and a group of friends calling themselves Storona Koroyla, which means 'King's Castles' in Ukrainian, were the victors.

2020 Chess was also been officially recognised by the English Chess Federation and accepted onto the council, more details can be found here:

As the world went into lockdown and over the board of the Chess became suspended because of efforts to combat the Coronavirus, 2020 Chess decided to accelerate their plans to introduce an online tournament across the world. Chess.com kindly agreed to sponsor it and put matches on their platform and we already have over 100 teams taking part currently and it's expanding fast.

The Tournament Director was recognized for these achievements by the English Chess Federation with the President's Award:

In April 2022, the Tournament Director Peter Hornsby decided it was time for the tournament to be renamed and rebranded, and issued with a new website.

This was because the tournament had grown so much and was receiving significant attention with the BBC, Sky News and Chess TV all featuring it, and the previous name was causing some understandable confusion.

We look forward to seeing both the online and over-the-board tournament continuing to grow from strength to strength!

They finished 6th in league but won the play-offs)