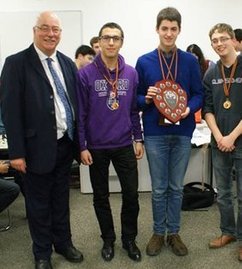 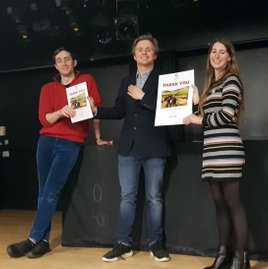 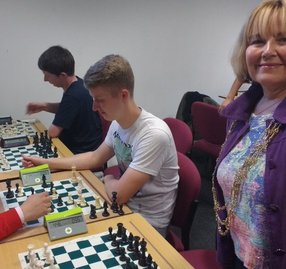 'On February 6th 2016, I attended the NUCC competition held at the College of Law, Barbican, London. I gave the prizes to the winners. It was a very happy occasion for the young men and women, British and Overseas, who competed in the day tournament.

It was notably very efficently and effectively organised by [the volunteers]. [They clearly] have a flair for organising events, and every confidence can be placed in [them]'

'It was great to attend the 2020 Chess event at the University of Birmingham on 1st February 2020.

Brilliant to see so many talented chess players and feel the excitement and tension in the air as the games hit the time limit. There was a good atmosphere, one of friendly challenge and fun.

The work of Peter Hornsby and his team to arrange the whole tournament was inspirational, I was delighted to be part of the grand final and hand out prizes to the talented winners and participants.

The whole tournament raised a significant amount for Oxfam which will make a real difference and fight the injustice of poverty.

Thank you to all involved'

2020 Chess has been an amazing experience for players from Fiji. Coming from one of the smallest chess playing nations of less than 30-40 active players online, this tournament has helped to boost our confidence. We were pleasantly surprised to hold off some of the teams we played, mainly because when chess was offline we would not get many formal games with international opponents like now. A big THANK YOU to everyone who made this event happen, and we hope that it continues for the benefit of many generations of chess players to come.

'I participated in the Birmingham 20/20. The event was well organised and the atmosphere was friendly and relaxed

Furthermore, it can be stated that the format and concept are a refreshing change to those who feel Rapid is too long (30 mins) and Blitz (5 min) should be left alone for the internet fraternity.

The use of University environments I feel is key to this. As parents feel this type of environment is safe, secure and provides encouragement to learning.

May I wish you all the best in your endeavours and once again congratulate you on an excellent tournament.'

'[The York qualifier] was a fantastic experience and [there is] an even more exciting prospect for the finals.'

'So it turned out to be a stronger than expected event. There were quite a lot of titled players on show.

This event definitely has legs and will improve further next time. The venue was very good. The organiser is keen to draw more clubs to it. Would be great if the bigger local clubs (and even those a bit further away) could field a team next time. It is worthy of supporting, is certainly plugging a gap as other than this we don't have a proper Allegro Team Event [in Scotland].'

'Thanks for the prize and the tournament, and for your work on behalf of chess - it is much appreciated!'

'I [was] delighted to award the prizes for the 2020 Chess Grand Final! I’m told that these tournaments which have run right across the UK started off [...] at the University of York on the initiative of a group of students who put considerable time effort and energy to establish this nationwide competition, so I would like to thank and congratulate them.

I would also like to thank the sponsors from Chess and Bridge who by providing the equipment and prizes have enabled this competition to grow and flourish, as well as the University of York for hosting this Grand Final event along with the Universities of Edinburgh, Manchester, Birmingham, Leeds and London College of Law where the qualifiers took place.

It is great to see so many students, from universities and schools as well as respected club players here, some of whom have travelled hundreds of miles [attending], well done!'

'On behalf of my club the Philippines' Finest Chess Club, we'd like to thank you for giving us another opportunity to play in the upcoming World Chess League.Live this coming September 11. We wouldn't have been known as the best club in Asia last season without your encouragement.

Thank you once again for instilling the values of perseverance and hard work - and for making us the world's best. If anyone deserves honor and great respect, it's you and your team.'